for otto bost, rest in peace my friend 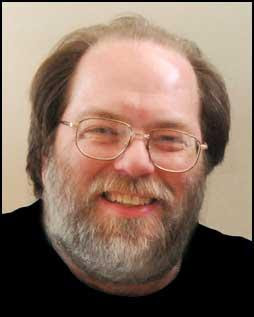 I am so sad this week to have learned from Gregg about the untimely death of our friend Otto Bost. Otto was many things to many people: a musician and songwriter; a thoughtful and erudite radio interviewer and longtime host of Acoustic Eclectic on WDIY; the best sound man you could ever hope for; a great campfire or bar-room companion with a dry sense of humor and a humbling knowledge of music.

I spent a lot of time thinking about Otto this week, something I have not done in a long time as we no longer lived near each other or had reason to see each other on a regular basis (last time we shared a beer with Otto was perhaps a Pavlov's Dawgs concert at Godfrey Daniels several years ago?). We were friends, and, for a time, I think, good friends, but not blood brothers: we were friends in the ways of musicians, circling around a shared scene and shared love and passion for music. Yet I was surprised and almost startled this week when I began to recall all of the ways -- some of them deeply personal -- in which Otto crossed my life for a period of time beginning around 1990 (when I was 20 and he was 30) and lasting over the next decade or so.

We met, as so many of us did, at Godfrey Daniels. Was a period of about 2 years in 1989 and 1990 when I was one of just a couple of guys who were the regular hosts for the legendary Sunday night Open Mike. I was odd-man out, 19 years old vs dudes and chicks mostly twice my age; most kids my age off at college. I had a baby daughter and a job(s) and every Sunday night I was at Godfreys trying to figure out how to make this thing work ("this thing" being the whole situation: the instrument, the voice, the electronics, the mechanics, the breathing, the joking, the moving...what to leave in and what to leave out, baby). Otto began showing up then, didn't have much to say, gravitated toward the sound board, and we were all happy to have him there as he made us all sound so good. Then he pulled out his own guitar and man he sounded so good. Otto was one of the first (maybe the first) person who learned a song of mine ("Oscar") and then played it publicly, regularly. When I went off to the army, Otto started hosting more and more and eventually mostly took it over for a while -- one of a thirty+ year neverending cycle of us who have taken a turn at keeping the Godfreys Sunday-night tradition alive.

But about the crossings of our paths...   Way back then, Otto talked me off the ledge a couple of times, when my own life seemed so desperate or sad or worthless or just simply fucked; he'd take me out onto the sidewalk in front of Godfreys and hand me a beer and he'd talk quietly and calmly and bring me back to earth. He was a much better guitar player than I was or am, and he would call me on my shit, sometimes while I was on the stage; he wouldn't stand for unnecessary sloppiness. When I was in the army, Otto wrote me letters, some of which made it all the way to Mogadishu, where he knew things weren't good for me. That calm, quiet voice came through in his written word as well as his spoken voice. When I came home to Easton in 1995 he was there to welcome me, and bring me back into the new version of the Godfreys family. He'd play a small part in the recording of the best music I ever officially recorded (the album Road Dogs, Assassins, and the Queen of Ohio) and a large part in the album that was never released (Traveling Nation). We both went through divorce and we both had kids and it was a series of conversations with Otto on these subjects that led to the best song I ever wrote, "Big Bananas," and while the song isn't Otto's story per se anyone who knows him would be able to see him in it, I think. And then many years later after I'd discovered my true vocation was the written word of a novel, I put him in one of them (In Hoboken) as a walk-on character, simply because I knew he'd dig it.

I wish we could share another song together, Otto. Wish we could hang out once more in the dark of Godfreys on a winter Sunday night, and maybe grab a bowl of chili and a beer across the street. Wish I could have had the chance to tell you how much your friendship meant to me over the years. Safe travels, my friend, and I hope to see you on the other side someday.
Posted by christianbauman at 3:16 PM