Check it, we've got an East Coast/West Coast nativity smackdown going on. Red Santa refs in the center, and Flying Santa Fish observes from above. 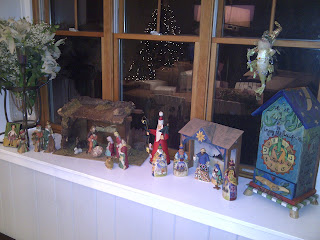 From the "mostly meaningless anniversary" department: an email from an old friend the other day reminded me that 2012 has been the tenth year, solid decade, long time, since the publication of my first novel. September, to be specific. Decades don't stand as the endless time span they seemed to be when we were younger; now, decades are just so many marbles in a rapidly filling bag of time gone by. This one blue, this one green, but all of them smaller than they seemed when I bought them, and recollection of where specifically I picked them up is long gone.

The remembrance of that fairly insignificant mark in time, though, reminded me of another. One that stands in a little more importance for me. This year is the twentieth anniversary of my deployment to Somalia, and almost day-specific: December 26, 1992. Two days from now. Here's how it went: October of 1991 I began basic training in the snows of Fort Knox, Kentucky; January 1992 I began 88L10 army mariner school at Fort Eustis, Virginia; March 1992 I joined the 1098th medium boat company, first in maintenance platoon, and then second platoon. (In my twice after that in and out of 1098th, I would always be in second platoon.) In mid-December of 1992 they detached a group of us to the newly created 710th provisional boat company, and locked us on to post. And the day after Christmas we flew on to Mogadishu. Our mike boats were waiting for us when we arrived, a mile offshore on the MV American Cormorant. We celebrated New Year 1992/1993 on the main deck of the Cormorant, somewhere in the mix of Somalian and Kenyan waters between Kismaayo and Mombaso. Me, Yarddog, Kipp, Meder, Meir, Norm, Burrage.... I don't think Anne was on the Cormorant, I think she flew from Mog to Kenya. I could be wrong about that. And by mid-Jan 1993 we'd be back in Somalia.

But before I ever set eyes on Somalia, I remember Christmas Eve and Christmas, twenty years ago this week, at Fort Eustis. No snow of course, it was Virginia, but it was cold. Even though we were locked in, we all went off base on Christmas Day. Where? Steve Stalder's apartment? Was that his name? Am I making that up? I can see him clear as day, as if he was standing in front of me now. Tall and grinning, "Check!" It was him and the guys who had come back from the Gulf War the year before. They bought beer and brought us out and got us drunk. I got back to the barracks late Christmas night. My room was empty and alone: my stuff was all packed, and my roommate Derek had been moved out; he'd gotten in trouble and was awaiting discharge. In the dark and quiet barracks hallways I smoked cigarettes and plugged quarters in the pay phone and tried to convince this sometime girlfriend of mine, Leah, to come over, but it was Christmas and that wasn't happening. I went back to my room and tried to write, and that wasn't happening either. The next day we got on a bus, passing the Christmas lights draped over the bushes and around the doors and windows of on-base housing, off post through Newport News, to a waiting charter plane. Then we flew to Africa. 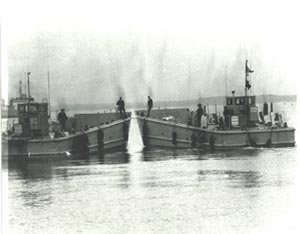 Back to books for a moment. After The Ice Beneath You in 2002, Voodoo Lounge and In Hoboken each followed on three-year schedules. Not intentional, but a respectable timespan. It's now been the end of the fourth year since In Hoboken was released, and it's reasonable to ask "Hello? Anytime soon?" All I can report now is that in 2012 I made my peace with the fact that this one is just going to take me longer, and I'm okay with that.

Merry Christmas, everyone. And to you Sea Dogs out there: double merry to you. I miss you. Bottles of whiskey and bottles of beer, I wish you all a happy new year.
Posted by christianbauman at 10:19 AM