april and everything after 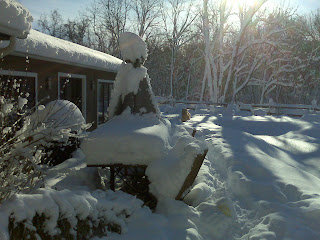 Hard to believe, but about a month ago things still looked like that in Pennsylvania. That's the view out of my kitchen door, Buddha the chow/lab in the far distance. And this weekend? 75 and sunny. We spent Easter at Peace Valley Park with burgers and beers. Nice. 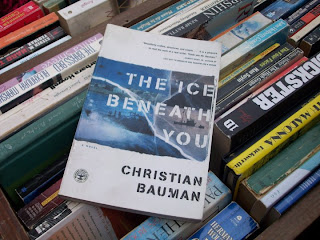 In other news: My favorite local bookstore is Farleys, where daughter Kristina works when she's home from college. Anyway, Krissy sent along this pic that a Farleys colleague took in Paris, of The Ice Beneath You in the used bin at Shakespeare & Co. I love it. Funny thing: I remember right around the time that Ice came out (back in 2002!), some journalist asked me what "success" as a novelist would look like to me. My answer was that success would be my book or books ending up as beat-up and abused paperbacks in the backpacks and messenger bags of high school and college kids and travelers and beach bums. So, the used bin at Shakespeare & Co is very good news indeed.
Speaking of Ice, it's been one of the things keeping me silent here for so long. I've been working on a sceenplay of it, with my friend Matt Walker. Matt was the editor at Simon & Schuster who bought Ice. He later went on to other professions and other things, and we thought it would be fun to take a whack at adapting my first book. (There were Ice movie false starts back when the novel first came out...I'll tell those stories someday if the movie ever gets made.) I've never written a screenplay before, so this has been a fun education. We'll see what happens. If nothing else, it's been great to mind-meld with Mr. Walker.
What else? Speaking of Kristina, the poor thing ripped her ACL when we were in Quebec this February. Very very painful. She finally had surgery...and then fell on it a week later. As the short guy in Princess Bride says: inconceivable! There are some really horrific pictures of her knee she sent me. I was going to post one here...but in a moment of clarity have now thought better of it. She says she's doing somewhat better and limping along. Not how she wanted to spend her last 6 weeks in college, I'm sure. Poor kid.
And what else? My new colleague and friend Jeff Goldberg has a delicious tale of removing his wedding band here. And my other new colleague and friend John Foti has a pretty cool new album here.
Posted by christianbauman at 1:29 PM