Daughter Kristina and friend Nick DiGiovanni hooked me into GoodReads a while back, and I've lately been catching up with my postings. I'm in general a very stumble-along kind of reader...no agenda or schedule. I have a huge stack of unread books, and usual case is that when I finish one I grab whatever from the stack moves me at that moment.

For the upcoming election, though, I set out a three-book process. I'm halfway through.

1. I wanted to be inspired, presidentially, and at the same time fill in some large blanks about a president I know woefully little about. So I went with the big book of Lincoln.

2. I wanted a reminder (as if I need one; Christ) of how important my vote is, and how much damage one man can do. So I went with "Angler," the new book about Cheney. I'm halfway through that now.

3. To cap it, I'll turn to my man's own words, which I have not yet read. Not sure which I'll read, "Dreams of my Father" or "Audacity of Hope." Probably the first one.

(And just in case you're wondering...yes, I have decided what I'm reading on the heels of this presidential swim. The new one by Marilynne Robinson, "Home.")
Posted by christianbauman at 12:15 PM

Gregg sings it. "50 Reasons to Vote Obama." Yeah.
Posted by christianbauman at 10:09 PM

new albums from Linda and Jack, and a return to Vin

Tune-in alert: I'll be returning to Vin Scelsa's Idiot's Delight on the evening of Saturday Nov 1 (schedule and streaming info here) for a little pre-election hell-raising, as well as some chatter from and about my essay "Letter to a Young Enlistee" from the new anthology War Is...


In other news, two old musician friends have new releases (recent readers of In Hoboken can decide if they want to play "Who's that character based on?").


First is the amazing, the lovely, the talented Linda Sharar. Linda, Gregg, and I have spent more time together cramped between guitar cases in small vehicles than any three humans ought. We explored the burnt-out remains of Woody's childhood home together, we picked ticks off each other (same trip, oddly), we...well, you get the point. Her new album is called Everyday. It's wonderful. This is Linda's first outing post-motherhood, and that experience has added in richness to her lyricist's pen. And of course, as always, Linda packs a killer band. 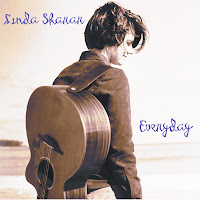 Also new in the world is a project from Jack Hardy. Jack and his old pal David Massengill have taken to calling themselves the Folk Brothers, and did a CD to prove it. That's Jack on the right (if you didn't already know that...) 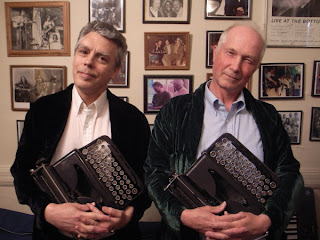 This one I just got in the mail and am only halfway through, but fantastic so far. Mark Dann on lead guitar, two great songwriters (and singers, let us not forget), and a song called "The Worst President Ever." What's not to like?
Posted by christianbauman at 2:22 PM