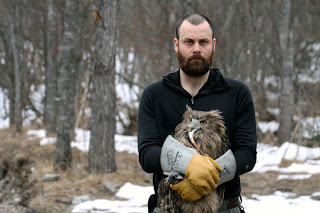 Is that the best picture you've ever seen or what? That's my cousin, Jon (or, as he's introduced in the article, "Dr. Slaght"), as he appeared this morning in all his owly glory in The New York Times, in a great article you can find here. I'm very fond of Jon, although I have not seen him in a while (well, you know, he's in Russia, saving owls). I think the last time I saw Jon was almost a decade ago, on some book tour or something, one night in the Twin Cities with ol' friend/fellow writer Joel Turnipseed, an evening that I believe may have been spent huddled over many, many Scotches. Very hazy memories of that night, so I'm not sure. Scotch with long-lost cousins will do that to you. More on Jon and his wonderful owls here.

What else? Brian Rose has written a wonderful remembrance of Jack Hardy here. Connie sent me the link. A very honest, thoughtful assessment/memoir. Brian quotes me in there, and I meant what I said. I cannot overemphasize what Jack's encouragement meant to me emotionally, and what it did for me in terms of forward momentum. Almost seems silly and simple to say, but sometimes simplest is what does it best: man, I miss Jack.
Posted by christianbauman at 6:05 PM 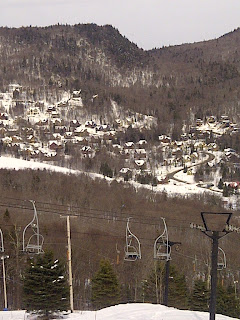 Everyone's got a happy place, right? The pic above is on my top 5. Also top 5 places most likely to bug out to when it all goes bad. (Those two lists are not identical.) Nestled up high at the top of a box canyon about 10 minutes north of the village of Stoneham, which is itself about 20 minutes north of Quebec City. So, now you know where to find me when it all goes bad. Not a zombie apocalypse, mind you. Would be no good for that. But bad in other ways? Yeah. I'll be up there with a bottle of wine and steaming mess of this: 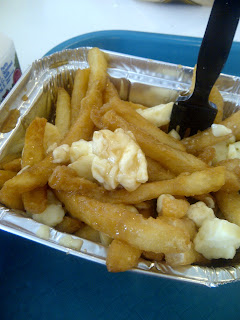 That's poutine, Quebec's gift to all humanity. Fries, gravy, and cheese. Oh mama. With a lipitor on the side.

What else? I've resolved to be a good literary citizen and reengage with Goodreads. Not today. But soon. I always liked the site, and hopped on early. But life gets in the way, you know. And I don't know about you, but when you average about two books a week it gets cumbersome to document it all. And do I really want to document it all? Well, anyway, I'm going to try again. Soon.

In the meantime, my unintentional winter focus on memoir and essay continues. Totally blown away by Alison Bechdel's Are You My Mother? (a gift from daughter Krissy) immediately followed by its predecessor Fun House. Both of them shut me up and shut me down, for different reasons respectively. Fun House was pretty great, but Are You My Mother? was transcendent (whatever that means, but it must be good). In the same week I finally read a tome Krissy gave me a year ago, the latest from one of my favorites, Michael Ondaatje's The Cat's Table, which he claims is not memoir but feels more memoir than novel. Either way, doesn't really matter; a wonderful book. Ondaatje makes me feel like the world's worst hack of a writer and a general all-around fraud. Very few can touch him.

I'm about halfway through Larry McMurtry's memoirish Walter Benjamin at the Dairy Queen (a gift from colleague/friend Sam Hoar), which has this delicious line in its opening pages: "People on their way to Abeline might as well be on their way to hell." And another colleague/friend (sounds like an affliction) Deirdre Dempsey is responsible for the collection of Harry Houdini writings I'm fixing to dig into any day now.

Now that I think on it, I'm reminded that Ms. DD also gave me the other memoir I just finished: Patti Smith's Just Kids. I wasn't sure what I would make of this. I was never a big PS fan (except in a mega-nerd way of knowing her role behind the scenes of Blue Oyster Cult); and the last time I ran into Robert Mapplethorpe in a book it was in Bruce Chatwin's biography by Nicholas Shakespeare, when Chatwin bounces from Mapplethorpe's arms into Edmund White's. I have to say, though: I tore through this book as if on fire. I loved it. Unabashedly. Why? Couple reasons. Part was Patti's voice, which I didn't love in the opening pages but came to adore as the book moved forward: passionate, transparent, urgent, empathetic. Part of the love was also some of the gossipy before-they-were-gods stuff of others I admire: like I said, Blue Oyster Cult, and Janis, and Jimi; Lou Reed and CBGBs; and very funny section where Ginsburg tries to pick her up because he has mistaken her for a boy. Great stuff. What else? Their relationship, or at least Patti's side of it. The love of two friends for each other. And two other important things from this book:

First is the breadth of being an artist that Patti both pursued, and that was more accepted then. None of this "this is your little box to live in" shit. You could be a poet, a lyricist, a painter, and actor...all of them, with no malice.

And second, the other main character in this book after Patti and Robert: weird New York. Freakazoid 1970s New York, playground of hedonists and aliens and werewolves and junkies. I remember that New York; I was a kid who saw that New York, and then lived it personally in its waning age of the 1980s. By the time I came home from the army in the mid-90s, it was gone. All gone. I spend most of my days in and around Chelsea and Meatpacking now, and you would never know. Patti's book brought it back. Fabulous. I'm trying to touch just a little bit of that with what I'm writing now, and reading Just Kids was a good charge to the creative batteries.

Okay, great, so now what the hell am I going to post on Goodreads? Next group of books. Next group.

Oh wait, one more thing: Stephen King wrote a sequel to The Shining, coming this summer or fall. I. Am. Psyched. Danny Torrence was on the short list of King characters I would love to visit again, including Ben Mears, Charlie McGee, maybe Stu Redman. Bring it, Steve. And don't let me down. (He won't, I'm confident.)
Posted by christianbauman at 1:16 PM