Late to the party, but I'm in.
I sent books. You send money.

Oh dear. I guess my politial affiliation is public.
What a shock.
Posted by christianbauman at 1:47 PM

The news today, oh boy, is David Foster Wallace has died, at a very young age, and from terrible circumstances.

In private conversations with writers and other artists I trust, I’ve been known to discuss dividing the world of novelists (and maybe the whole world) into two camps: those who get the joke and those who don’t get the joke. You know, “the joke.”

D.F. Wallace, though, was a different stripe of cat altogether. Even saying “gets the joke” has a certain finality to it; i.e., to get the joke, the joke’s been told and done. But Wallace seemed to play on the plane of the never-ending joke. Hey, I’m not talking about the title of his novel here.

Anyway. You had to walk away from your life to read Wallace, slip through the door. And you had to bring a fork.

And now it seems David himself has slipped through the door; his method was different, but he’s laid the terrible master to waste. Poor David. His poor wife.
Posted by christianbauman at 6:35 AM

I had a tasty breakfast and friendly sit-down a few weeks ago with Richard Cuccaro, him what used to run ye olde Fast Folk Cafe in New York's Tribeca neighborhood. Richard now edits Acoustic Live, one of the last of the folkie pubs still thankfully hanging on, and the breadth and depth of our conversation is in the article he wrote for this month's issue. Included in the free admission are some choice (you can define that word any way you like) old photos of some skinny young folksinger from many moons ago...like this 1996 photo below, of the skinny young folksinger and friends tearing one up with the skinny old folksinger.

That was "Do Re Mi" we were singing there, my favorite Woody Guthrie song. As I recall, we'd run through it once before the show, and had it about where we wanted it, and then when time came to do it onstage, Seeger came on already playing, and playing it about three times faster than I'm used to. His way was better, as it turns out. That picture up there ranks in the top 5 most fun 5 minutes I've ever had. Along for the ride up there are Carol Sharar (The Amazing Incredibles) on fiddle, Karl Dietel (The Samples) on bass, Gregg Cagno, and Amy & Jennie.
Posted by christianbauman at 12:15 PM

Just back from Mexico; on edge down there for awhile eyeballing Gustav's approach across the Atlantic, but it worked out for us. Not so much for New Orleans, so it seems this morning. But hopefully not as bad as Katrina.

It was my 20th high school reuinion (North Hunterdon Regional, Class of 88...barely, in my case) right before I left. I couldn't make it, but Gregg and Karl did.

I haven't made a reunion yet, and doubt that I will. High school and I had a less than comfortable relationship. If they had reunions for grade school, I'd go to that, I think (not that my relationship with education was any stronger in the younger grades). 4th through 8th grade I went to Franklin Township School in tiny Quakertown, NJ. We were still partially a farm community back then. There were only two classes for each grade, so maybe 40 kids total per grade. It was awful, frequently, because we all knew each other and each other's business in inescapable ways...there were no secrets and no hiding. But like prison or the army, those close-quartered bonds come to mean something. You get a group protection mentality, even when you're eviscerating your own members inside. It is possible to hate and love someone at the same time, and I learned that at FTS.

But then we all left and went to the huge regional high school (of the aforementioned reuinon).

Anyway, I didn't go to the reunion, but I (surprise) wrote something for the local paper's (Hunterdon County Democrat) monthly magazine about it. You should be able to right click it below then blow it up to read. It's about me and Gregg. Yeah, those are our Senior portraits to the left. Yuck it up. 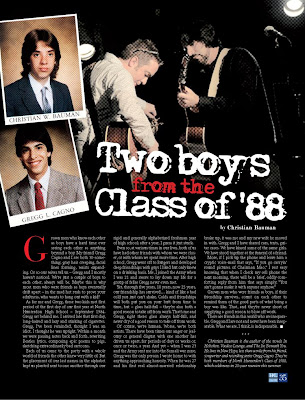 In other news, Obama picked ol' Joe Biden for his running mate last week. I'm okay with that. Joe is a good guy, and a native Pennsylvanian. I met him, twice, although he certainly wouldn't remember. Two years ago, when my daughter Kristina was a freshman at college in New Hampshire (this before transfering to UVM). I flew up twice on the Saturday morning dawn patrol from Philadelphia, and both times ol Joe was onboard. A Senator, visiting New Hampshire regularly, a year before a Presidential election? Not hard to figure that one out.

Speaking of Kristina, she's a diehard Nader girl. And this will be her first votable presidential election. It's kind of fun, having differing politics in the household (fun unless there's a slide to the right, and then someone loses an eye). Krissy is collecting her own political meets already. This is her and ol' Ralph, from a bunch of years ago: 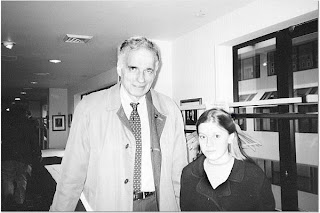 The setting was the National Press Club in Washington. The occasion can be found in the essay link to the right labeled "Mr. Bauman Goes to Washington" or something like that. Anyway, I like ol' Ralph a great deal, I think he's a kind of a genius, an often-unheralded gift to this country, and he had or has my support in most everything he does...I just wish he'd stop running for president. It's just that one tiny thing I don't agree with him on.

Anyway, Autumn approaches, thankfully. Happy time. And writing time, too. Happy September... time to lie down in that September grass.

Posted by christianbauman at 10:27 AM