July 14 was the 100th birthday of Woodrow Wilson Guthrie, or Woody as he was known. There's been quite a lot of media attention lately, given the birthday (including this news of the publication of his unpublished novel with two unlikely but cool editors). I've said quite a bit about Woody over the years. I discovered Woody (in the spiritual sense...I'd known about him for years, but without big emotion one way or the other) the way many in my generation did: through Joe Klein's remarkable biography of him. I was 19, living in New Jersey, but going to school once a week at HB Studio (a theater school) in the West Village of New York. I thought I wanted to be an actor, but wasn't very happy. It was slowly starting to dawn on me that I might be a better writer, and might be a happier person for it. Spending a night a week with Jack Hardy and his band of pirates helped me to see clear to that. And discovering Klein's bio of Woody had a lot to do with it, too. I found it in a bookstore in the Village on a cold day. I devoured it (appropriately, at the White Horse Tavern, where Dylan Thomas died). Besides simply introducing me to Woody, the book started changing how I thought about myself, what I thought about my art and its purpose and its place in my life, and how I might want to live my life. When I was a guest on Fresh Air many years later, Terry Gross made a comment about how strange it was that a "folkie" like me would end up as a soldier, and yet it was reading Woody's biography that was one of the first major steps leading up to me joining the army in 1991. 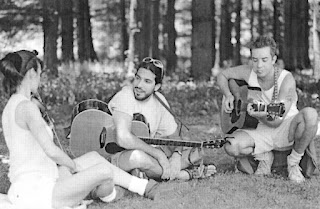 The pic above, one of my favorites, is Carol Sharar, Gregg Cagno, and myself sitting in the grass behind the stage at a park in Pennsylvania moments before we performed Woody's song "Do Re Mi" with Pete Seeger in 1995...hands down one of the coolest moments of my life. The moment got trumped several years later. Gregg and I and Carol's sister Linda were on the road, touring as Camp Hoboken, and made a side trip to Okemah, Oklahoma, so I could see Woody's home town. The pic below is of the three water towers that stand over the town, labeled HOT, COLD, and HOME OF WOODY GUTHRIE. I think he would have dug that. We were driven around town by Woody's cousin Debbie Tanner. At the end of the day, she made a phone call, then handed us directions. After a bit of a drive we found ourselves at the home of Mary Jo Gurhtire, Woody's little sister. 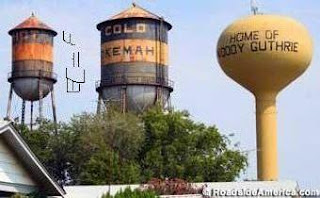 That's us with her, below. She looks just like him. In fact, when a statue was made of Woody, the sculptor used Mary Jo as the model. As with Pete, we sang "Do Re Mi" (along with a bunch of other songs). An amazing afternoon. I'll never forget it. 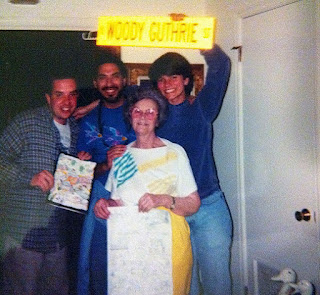 Late that night, our weary trio checked into a no-tell motel off an Oklahoma interstate for some sleep. Long story short, within an hour we found ourselves itching like crazy, then dropping our clothes shamelessly. We were all covered in deer tics. We'd picked them up while poking around in the overgrown ruins of Woody's childhood home. We finally got rid of the tics, but sleep wasn't going to happen after that. I recall we spent most of the night playing guitar, drinking, and watching out the window as a particularly fierce storm passed by the motel.

And almost 20 years later, here's our merry trio, reunited, below. Damn, we old. July also saw the 18th Annual Black Potatoe Fest in Clinton, NJ, run by our old pals Matt and Beth Williams. Linda came down to play a set, and we couldn't help but join her for one. We sang Don Brody's "99 Years" (you'll find the lyrics to that one intertwined in my "In Hoboken").
[UPDATE: some nice person just posted the song on YouTube...Linda does verse 1, Gregg has 2, and I have 3. Reaching for those high notes, but squeaking by...] 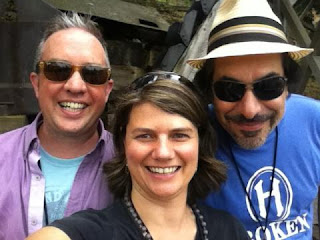 And here's the almost full Camp Hoboken reunion, sans Mr. Grula. He's down in Florida, working for Mr. Chen. (We all work for Mr. Chen, but that's another story.) 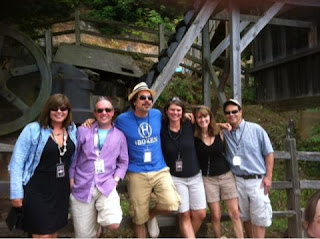 Was great to see old pals The Collins Brothers Band rocking the stage that day, as well. 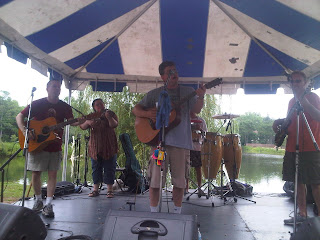 Not a bad way to spend mid-summer. I'm a lucky guy.
And what else?
Krissy and Logan got a new dog. Mab, her name is. They came by recently to introduce me and Fiona to her. She's a good dog. 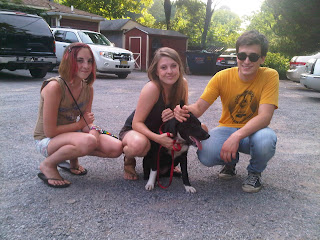 Posted by christianbauman at 3:42 PM