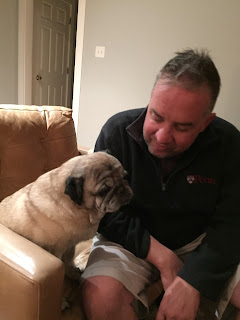 It's been a long while since I checked in here. Been a few gray months at Chez Booman. I'm very sad to report my old man passed away a few weeks ago, after a relatively brief but what felt like endless and uncomfortable illness for him. It was a surprise, he was only 10. Boris was a grouchy, arrogant, selfish old bastard and I loved him dearly. Dogs aplenty all around us these days, but it's just not the same without Big B, King of the Pugs, Master of the Universe. RIP ol' fella. 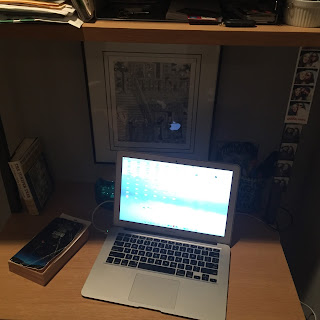 Two books on my desk this week, both re-reads from childhood. The beautifully bound hardback there is The Juniper Tree, an uncensored collection of Grimm with all the blood and badness you can handle, as the stories were originally intended. This is the collection from the late 70s with illustrations from Maurice Sendak. I think it's some of his most striking and memorable work. Those illustrations became the font of my dreams and imagination when I first saw them as a boy. Dark and weird and awesome. (In what was a coincidence or perhaps not, I also recently re-read Peter Straub's Shadowland, which if you've read it you know is chock full of Grimmness. Why that novel never saw the success of Ghost Story or Koko I'll never know; it's a masterpiece, and the recent re-read did nothing to dissuade me of that opinion.) Next to it there is an old paperback of The Stand. I decided I wanted to revisit that this winter but couldn't find either of my copies. After some research it turns out you can't get the original version anymore, just the updated door stop that was published in the 1990s. While there were some additions in there I truly loved -- including Flagg's rebirth at the end -- they don't trump my dissatisfaction with the time updating Mr. King did when he reissued it, moving the action forward a decade. That book was to me (like Salems Lot and Dead Zone, as examples) a product of its time and powerfully connected to it, and having all the cultural references change was something I was never happy with. So I tracked down a copy of the original online and ordered it. There was no picture with it, so when I opened the envelope I was pleasantly surprised (read: ecstatic) to find a dog-eared paperback of the very version I first read when I was 11 or 12 or so and then re-read at least once a year through my teen years. The pages are yellow and crumpled and it smells like a paperback.

On my end, the pencils are down on The Night Door. The powers that be are doing what they do to find it a home, and perhaps the next time I write here there may be some news. We'll see.
Posted by christianbauman at 2:52 PM