nicholson bakes a new one 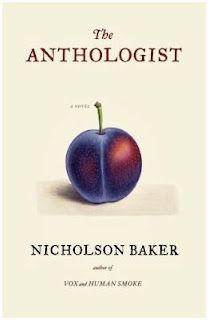 Nicholson Baker is a weird, wonderful writer. I've not read all his books. In some cases, I have some catching up to do. In others, the subject matter didn't appeal to me. But I read his sort-of memoir U & I years ago, and I read A Box of Matches when it was released. I was unsure when I began it, but ended up devouring it in a day, and then went back for a second read. I pushed it on everyone I ran into for the next few weeks. Checkpoint I never got to, likewise Human Smoke (although I'm very intrigued by the nonfiction Human Smoke, and have it on the list). But The Anthologist I guessed I would enjoy from the first I heard of it, and sure enough it hasn't let me down. The writing I'd hoped to do today on a flight to San Francisco was dashed by crying babies, but instead I got to read this book. In many ways, it seems an extention of A Box of Matches. It's a different protagonist, a different story, but similar in form, tone, and style in all the right ways. It's like revisiting A Box of Matches, but more focused. (The plot, at broad stroke, is a medium-success poet who is attempting and failing to write an introduction to a new anthology of poetry.)

Baker is fun...one of the main reasons I like his stuff so much (or what I've read of it). It's hard not to like him while you're reading. He's having such a good time with language, and so enthusiastically bouncing all over the place in thought. (He's also a folk fan; anyone who tips a hat to Slaid Cleaves in the first few pages of a novel gets a smile from me.) But I think what I really admire about him is his unabashed honesty. It's that same honesty that his detractors don't care for, I think. Too much honesty, they say. But I recognize in his work a level of self-reflection I'm envious of as a writer. Seldom have I witnessed a novelist lay it out there so boldly as Baker does. There is much to learn for me, from him.

Anyway, I found a great passage in the book that I'll post here. This actually isn't self-reflection on his part as I describe above, but just funny and true.

"At some point you have to set aside snobbery and what you think is culture and recognize that any random episode of Friends is probably better, more uplifting for the human spirit, than ninety-nine percent of the poetry or drama or fiction or history ever published. Think of that. Of course yes, Tolstoy and of course Keats and blah blah and yes indeed of course yes. But we're living in an age that has a tremendous richness of invention. And some of the most inventive people get no recognition at all. They get tons of money but no recognition as artists. Which is probably much healthier for them and better for their art."
Posted by christianbauman at 10:04 PM

Aligned with my post a few down about needing to get my ass in gear, we have 3 fun conversations currently in action over at J. Robert Lennon and Rhian Ellis's Ward Six writers/readers blog. The conversations loop and digress, but essentially: 1. writing too much, 2. devotion to writing, and 3. batshit crazy novels written by those we adore.
Posted by christianbauman at 10:27 AM