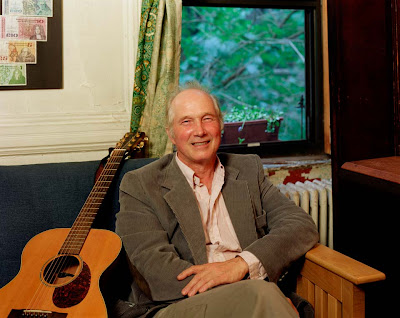 Great picture of Jack Hardy above was taken by Brian Rose just a few months before Jack's untimely death one year ago. When I heard about Jack's death I wrote this long post. My old pal Jon Colcord (a fellow veteran, Hardy fan, one of the guys I dedicated The Ice Beneath You to, and a folk dj up in New Hampshire) got in touch recently and asked if I would read the piece for a Hardy tribute show he was doing. I did, and you can hear it here. An all-around terrific show that Jon put together...a good remembrance if you're a Hardy fan, and a good introduction if like so many others you're just getting into him now. Jack always said that the dead get fatter royalty checks.
In other news, I'm in Berlin this morning. I've been to Germany a few times before, but this is my first time in Berlin. I've always fascinated by Germany and the Germans. In World War 2 my grandfather was a US Army sergeant posted at a German POW camp (ironically right down the road from Ft Eustis, Virginia, where I would spend my 4 years in the service), and he befriended some of the former German soldiers...all of them working class, like him, pulled into the German war machine. The year I lived in India when I was a kid I discovered Robert Ludlum, and (like the Bourne movie writers who came later) realized what a great setting this country is for a thriller. Of course some of my German curiosity stems from ethnicity. Although I always felt a stronger psychic kinship with my Irish roots, the fact is that when your name is Christian William Bauman at some point you just can't get away from the fact that your blood is at least partially German. I wish I knew more about my German side. But whoever those Baumans were they came to the States a long time ago. Unlikely that I will ever know more. Anyway, just a few months ago I read In the Garden of Beasts, the eerie history by Erik Larson of an American family living in Berlin in the beginning of the Third Reich. Their neighborhood is where my hotel is. Directly across the street from my hotel is the building that was the headquarters of the German army in the war. It opens onto a courtyard where the 1944 coup leaders were shot. 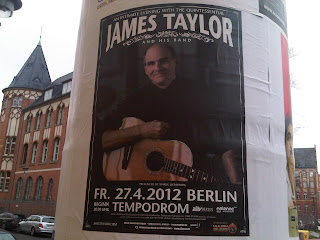 But enough of that ancient history and evil times. I love Germany and am enjoying Berlin. And spring must be coming...James Taylor is on his way.
What else? Well, if you want a good way to kill a whole year (or maybe a whole decade), you can lose yourself here: they put the entire Alan Lomax archive online.
And finally, a little bit ago I wrote about Jim Farley passing away, and my love of his bookstore. There's a cool article about Farleys here, with the whole history.
Posted by christianbauman at 12:24 PM