What's new? We're down to 2 dogs, from a high of 4. Long story there. Teach na madre still, just a little less bow-wow.  Fiona has a cast, but on the mend and still playing soccer. Kristina says she made a rasher of bacon, which is especially fascinating if you know anything about Kristina. What else? I have a reading project this week: first I'm re-reading Dracula for the first time in many years, maybe since I was a teenager. On the heels of that I'm going to pivot to Salems Lot, the 70s version of Dracula, and one of the books that changed my life. I'm not alone in that, in my generation. Again, long time since I've revisited those pages. Overdue. As for writing, guy named David Abrams wrote a novel called Fobbit, his first. A fellow army vet, albeit from a different era. I reviewed it for the NY Times, you can read more here.

You may have heard today that the US team lost the bi-annual Ryder Cup to their European counterparts (again). True, true. But let it not go without saying that in the Junior Ryder Cup -- US and European teams containing the best golfers in the 15 to 17 age group -- the US prevailed! And why do I care? Because my niece Samantha Wagner was on that US team. Okay, she's not techincally my niece, she's my first cousin, but I'm 42 and she's 15 and uncle/niece works fine for us, and for her brother CJ (another stellar golfer, and likely future US Senator from the great state of Florida). That's Sam below, at Olympia Fields last Tuesday. 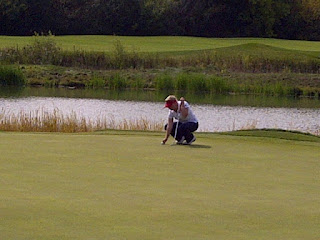 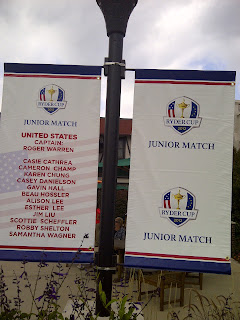 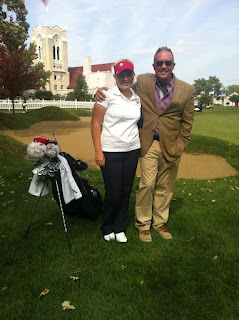 Truly, one of the proudest days in our family. Sam and CJ are amazing kids, and to see Sammy so completely in her element, kicking ass, having fun...it was awesome.
Posted by christianbauman at 9:46 PM