Detz or Debts, he's still Karl Dietel to me

First day of high school (September, 1984), first period, the guy sitting behind me was Gregg Cagno, and the guy sitting next to me was Karl Dietel. Note the alphabetization. By junior year, we were, respectively, the drummer, rhythm guitar player, and keyboard player for Hypothermia, a rockin' little unit of a high school band that had the audacity to attempt things like "Scenes From An Italian Restaurant." When Matt and Mike graduated a year before us (they weren't smarter, just older) the band changed (wipe a tear)...but ultimately the friendships stayed. Karl did a lot of dubious things like playing bass with me whenever I asked him to, usually for no money (dear Jesus, who can count the brain cells lost at Miller's Tavern?)...and he did a lot of very cool things, too. Like the fact that he's gone on to become the keyboard player for The Samples and travels around in a tour bus and plays Red Rocks and shit like that. 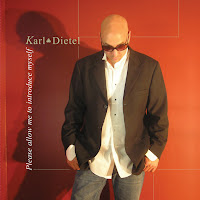 Posted by christianbauman at 10:16 AM

not the cover of In Hoboken

This down below is not the cover of In Hoboken. But it was an early idea, and I still think pretty cool. 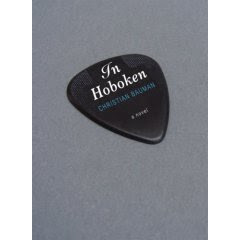 The real cover is even cooler. I'll have a copy to share sometime soon, I think. First time I've ever been really happy with a book cover on the first try. Melville House is known for their gorgeous and creative book covers. I wouldn't be lying if I said that was one of the reasons I went with them. Is that shallow? Nah. Covers are important. And, I think, even more important now that we don't have LP covers anymore. Book covers are the last bastion of physical coolness and excitement wrapping commercially available art. Much as I love being able to have 5 gazillion songs on the ipod, I weep for the LP cover. Hell, even the CD cover was something...and that's essentially sunk now too.

Posted by christianbauman at 12:05 PM

Singing for Don, with Con, Lon, Gron, and Cowshavewool

Don Brody died 10 years ago this month, a startling realization on so many levels. I don't want to go into the whole "Holy shit, 10 years," thing...but holy shit, 10 years. I was 27 years old 10 years ago, and a very different person in many ways, most of those ways not good. We all, of course, looked a lot younger. The jokey folkie touring poster below was made 10 years ago. Don was 42, and Grula was I think solidly in his 30s, but the rest of us were valiantly holding on to being young and stupid.

In December 1997, Brenda and I had recently moved into a little white stucco cottage not far from High Rocks Park on Smithtown Road in Pipersville, Pennsylvania. Gregg had sort of moved in with us, too, floating between eras. He stayed in Kristina's room when she wasn't with us, his boxes and CDs in the basement. We were all in the kitchen with its tile floor and red counters when Connie called and told us the news. We had all just been in the Poconos for Folk Alliance and then a gig at Shannon Lounge in Hoboken, our last gig with Don.

10 years, and Don's son Perry is now 15 and singing like a rock star, from what I hear. 10 years, and so there's going to be an album of Don's songs, sung by those of us he left behind. Graham Parker, The Bongos, Dar Williams, Marshall Crenshaw, other coolsters and hipsters. And Camp Hoboken, of course. Connie called a few weeks ago. Howsabout singing "Mr. Woods" she sez. Howsabout indeed. I haven't sung a note since 2000. Why not why not. So in the studio we went, Thanksgiving weekend...that's Gregg, Connie, and Carol with Rave down below. 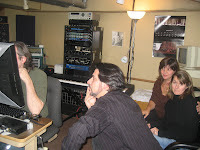 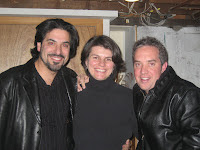 That's the original touring trio there. We're not a bunch of 27 year olds anymore, but what the hell, man. What the hell. We did get the black memo, and it's funny how in all the important and healthy ways time doesn't seem to go by at all.

Posted by christianbauman at 8:08 AM