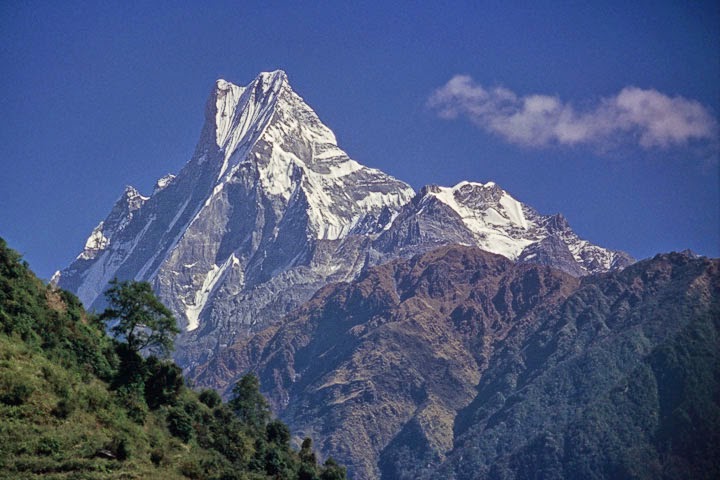 It's cold and it's crappy on the east coast, still, seemingly forever. I'm reminded of Richard Julian's line about a year with no month of May. I know it's still April and not May yet, but you get my point. And I fear May will be no different. Maybe this crap weather is a perfect companion for all the news today, all of it seemingly about death. The ferry in South Korea. Gabriel Garcia Marquez. Rod Kennedy. But the news I can't shake today is this, 12 Sherpas dead in Nepal.

The photo above is Machapuchare, also known as The Fish Tail (note the double summit), one of the most visually stunning mountains in Nepal, as well as one of the holiest. It is illegal to climb it, and no one has ever done so. Machapooch, as I called it as a kid, is one of the key summits that forms a ring around what is known as the Annapurna Sanctuary, a glacial area at 14,000 feet that can only be entered by one tiny valley. Standing in the middle of the Annapurna Sanctuary, one has the feeling of being surrounded completely in a circle by mighty peaks.

In 1984, as I approached the age of 14, a group of Sherpas (on what would have been considered very light duty for them) led a group of us (Westerners from various homes: Americans, Brits, Israelis, as I recall) on a two-week trek whose highlights were (to me) the few days of being able to view this weird, mighty mountain you see above, and the two-weeks in the company of these cool, mighty men known as the Sherpas. They were strong, brave, very smart, very funny. Of all the different peoples I got to meet in our year on the Subcontinent, they were definitely among my favorites. Walking with them for two weeks was like walking with Rangers from The Lord of the Rings.

Final note: although I met him a couple of times, I didn't really know Rod Kennedy, but boy he sure had an impact on a lot of our lives. Can't even begin to count the ways. But simplest among them: hard pressed to think of a happier way to spend a week (or a month, if you were up for it) around a Kerrville camp fire (my favorite: Camp Coho, of course), not doing much beyond eating, drinking, playing guitar, napping. Thanks, Rod.
Posted by christianbauman at 12:02 PM