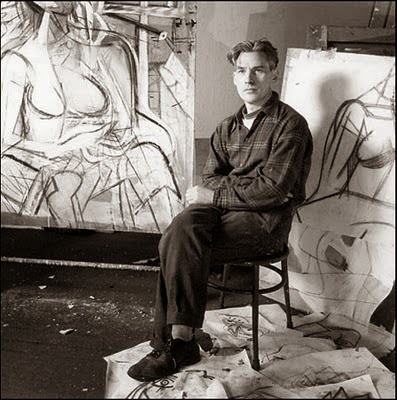 On this icy cold January morning with old snow blowing past my window, there's a view of Bill DeKooning for you. I was flipping through In Hoboken a month or so back, preparing for the fandango related in the previous post; in addition to a couple of songs, I was supposed to read from something. In the end, my reading turned out not to be from In Hoboken, but I thought it might be, so I was looking for something. I'm a little out of practice with this kind of thing, and couldn't find the dog-eared copies of my books that I used to keep, with appropriate reading sections nicely outlined and noted.

Anyway, flipping through the novel I had an experience that happens from time to time (that is, about once a year when I have reason to pick up one of the old books): I found something I had completely forgotten about. In this case, it's a little section of the novel, not even a set piece really, just a few-page digression, about Bill DeKooning and about the impermanence of art. It made me smile to read it and remember it. And I remembered how it had made me smile to write it. You know, one of those times where you probably woke up in the morning with every intention of writing but no intention at all of writing what finally came out, and as those two or three pages come out you're just smiling and amusing the shit out of yourself, no care in the world about the greater health of the novel or what anybody thinks about it, no thinking about anything except pleasing yourself. That's what those couple of pages were, back in 2007 when I wrote them.

I like Bill DeKooning. Understand that I'm often attracted to artists first by aspects I learn about their lives, positive or negative. Especially in art forms that I'm not as informed about, like for instance painting. You figure I can't learn everything about everything at this point, so what I tend to do is if I learn of someone I find interesting or fascinating at some point, i tend to go very deep on just that person. Perhaps later branching out to contemporaries or others who enter into their life story. But really going deep on the one artist. It's why I have a ridiculously large amount of Helene Grimaud on my ipod, and even twice that amount of Keith Jarrett. It's where my Woody Guthrie obsession came from when I was 18. And why I find myself thinking a lot about Wallace Stevens these past few years.

Anyway, about Bill DeKooning. Why do I like Bill? Bunch of reasons. He looks pretty confident and comfortable in the picture above, doesn't he? And he was, from a very early age. Long before he was successful. That's a reason right there. And then as far as success goes, he came to it very late, which is another reason. And even with critical success later in life, he was even slower to actually start selling, to make money from his art (not intentionally: what I mean is, people just didn't buy it).  And yeah sure, I remember back on the folk trail in the 90s getting great amazing gigs that many others weren't getting, landing them from patronage and support of this mover or that shaker who got it and dug me, and playing well etc, but not selling a fucking thing, not moving an album. Or sure, a few years later, with the laudatory review in this prestigious place or that, the glowing quote from lofty poo-bahs, and yet here we are a decade later and I'm sure Simon & Schuster has given up all hope of me ever earning back my initial advance from The Ice Beneath You (and it wasn't a very large advance, either). The curse of "the artists's artist." Ah yes. (And by the way, just for context: I'm writing these words with a large unobnoxious smile on my face and tongue firmly in cheek.) Anyway, Bill had that. Understood it. Lived it. So sure, I like him for it.

What else? Bill wasn't afraid of doing commercial art to support his real art (for a while, anyway). How did Bill come to the USA? Through Hampton Roads, Virginia, my old stomping grounds. And where did he go first from there? Hoboken.

Okay, but all surface (and narcissistic on my part) stuff aside, what was really cool about DeKooning? Here it is: As an artist, he was completely modern and new, and yet he refused to denounce the old, even under pressure. He understood and continued to embrace the old even as he moved past it. He didn't need to knock it. Bill DeKooning didn't knock much of anything, really. He was accepting and encouraging.

My friends, I don't care what your art form is: that's rare.
Anyway, here's to Bill DeKooning on this cold morning.

What else? My pal Boris has been watching me as I write this: 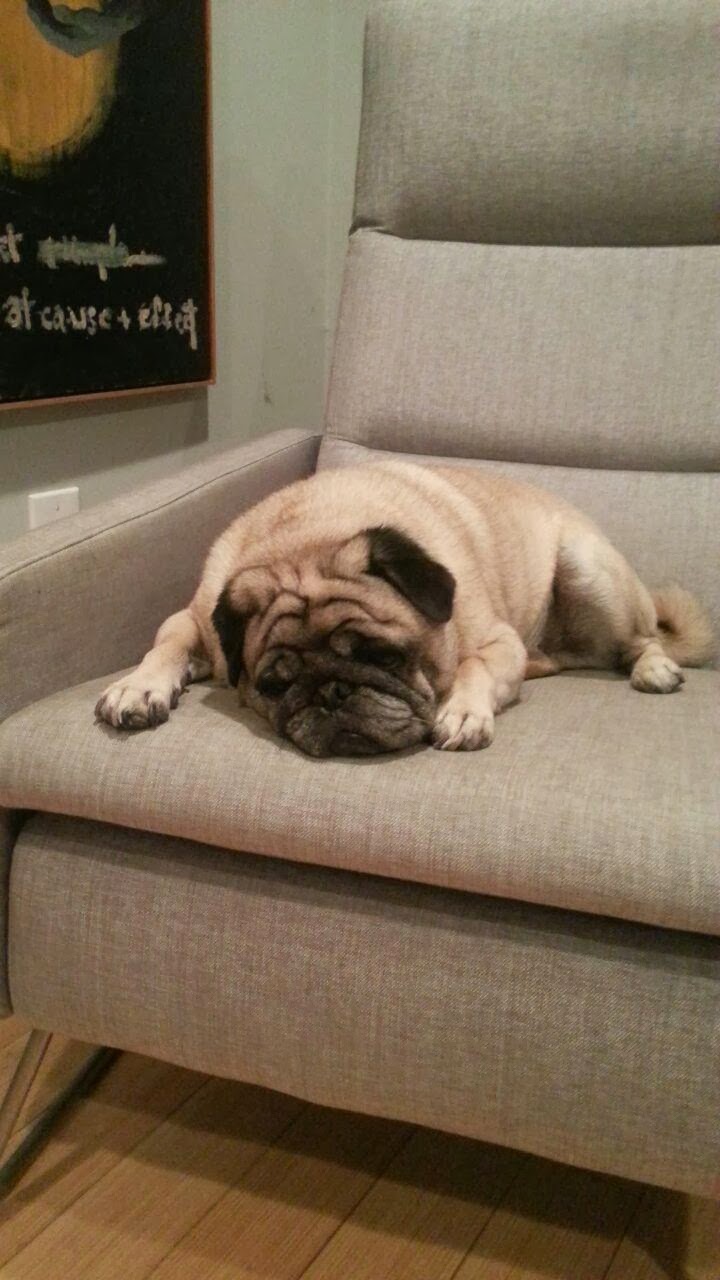 It seems that Boris is suffering from the ennui. A common affliction among artists and pugs. (By the way, that painting partially visible behind Boris, that's one of a number of paintings by Ed Kerns hanging in my house...himself at least partially a spiritual child of DeKooning. And no, I can't afford Kerns paintings. He's a friend.)

Enough for now. Back to work. And to start, as John Gorka once said: no warm feet on this January floor. That's for sure. I gotta go put some socks on, man.
Posted by christianbauman at 9:30 AM