"ravioli swimming in a lobster juice was my way"

There is little more rewarding and amusing in life than unintended brilliance from a failed translation. Note object one below, the "English version" of the menu offered to me around 9pm this past Sunday night at a cafe buried on a back street in Cassis (on the coast in Provence). Check the ravioli description. 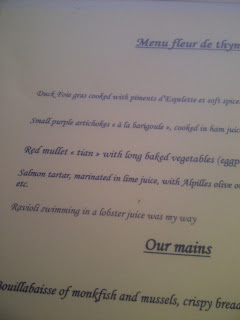 It sounds like the beginning of a poem, doesn't it? Or perhaps the name of a karaoke bar in Tokyo.

Speaking of food and poetry and France: last week when I wasn't eating, drinking, walking, or not-sleeping, I was reading The Raw and the Cooked by Jim Harrison. That's him in the photo, down below. Not entirely sure how I've gotten this far in life without reading this book of food essays; not for lack of knowledge of the volume, Kristina has been pressing it on me for a few years now. But regardless, this past week in Paris and Cassis is when I finally got there. Harrison is one of those writers -- and this is one of those books -- where every page contains a morsel, a quote, something that you want to write down somewhere, or grab a traveling companion by the arm and read it to them, whether they like it or not. This being Harrison's collected gourmand essays, most of the quotables were food-related, like this one:

"The idea is to eat well and not die from it -- for the simple reason that that would be the end of your eating."

But no shortage of non-food, general-life kinda stuff. I loved this thought:

"There's never anything behind a blackboard, just more blackboard, or so I thought back in school, where I never wanted to be anything else but elsewhere."

It's not every day you find a writer of Harrison's stature who failed as miserably at education as I did. Or, at least, admits to it publicly. It's refreshing.

Here's one final quote, I can't help myself:

"After I have written a novel, screenplay, or long poem, I have given away my mind and it is difficult to get it back. Walter Percy calls it the Reentry Problem, while George Romero and the Haitians call it something else." 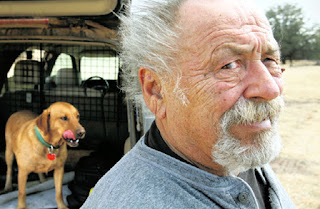 Plus, he's missing an eye and loves dogs. What's not to love. It was the perfect book for the train trip from Paris to Marseille, etc.

However: as good as the book is, the back cover (of the edition I was reading, anyway) is quite simply one of the worlds-worst ever, period. Really. And it not only offended me as a writer, it made me mad for Harrison, because jesus he surely deserves better than this stinking pile of shit. Whatever editorial assistant or summer intern from Brown that sat at a desk at Grove and wrote this opening line should (in the words of the late Sam Kinison) be made assistant manager of the night shift at Wendys in Tulsa: "Jim Harrison is one of the country's most beloved writers, a muscular, brilliantly economic stylist with a salty wisdom."

I don't even know where to begin in deconstructing that semantic house of crap cards. First, let's just start with "one of this country's most beloved writers"; well, he should be considered that, yes. But...never mind. And then there's that "muscular, brilliantly economic stylist." Oh fuck me. Why does every male writer have to be muscular or sensitive and nothing apparently in-between? I got the muscular tag applied to my first back cover as well, if I remember correctly. I might have even liked it, at the age of 29. Because 29 year-old writers are pretty stupid in general. And "brilliantly economic"? First, I have yet to meet a writer who has been described as "economic" who hasn't cringed at the term (it started with Carver, remember? And I hear he hated it too). More important, though: Harrison is hardly economic. He's a fucking poet. He's wonderfully verbose. He wraps his stories around a flowing language of silver-tongued awesomeness. But...he's an old dude who hunts and shits in the woods, so he must be muscular and economic.

As for "salty wisdom"...I have nothing to say. When I'm old, if anyone ever describes me as having salty wisdom, I'm going to poke their eyes out with a hot fork.

Long story short, take The Raw and the Cooked with you next time you go to France, but rip the back cover off of it.

Final note: the only downside of French travels this summer was missing the Peter Mulvey / Gregg Cagno show in NJ last week. They express their displeasure with me below... 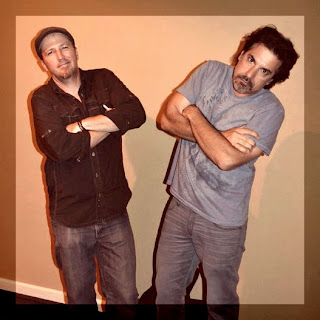 Posted by christianbauman at 9:13 AM