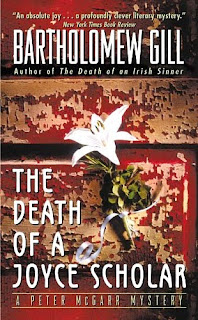 Thanksgiving and Christmas breaks usually (on good years) lead to much time on couch in front of fire, plowing through books. Which also tends to lead to some time standing in front of the various bookshelves, which leads to rearranging, fondling, dusting, you know. I found Bartholomew Gill whilst mussing about this year. And with daughter Kristina home from college for the holiday, holding the paperback in my hand made me very...whistful? Perhaps. (Is it wistful?Whistful?Whatever. I'm not even sure it's the word I want.)


Let me back up and say that I'm not surrounded by writers on a daily basis. I'm hat-tipping familiar enough with no shortage of scribes, even some of grand reputation. Being a reader as much as a writer, this is fun, no doubt. But means nothing, really. As far as my best of friends, not a noevlist among them. No shortage of artists of other ilk, but not much in the way of key-pounders. Some people I am very fond of who are writers, but I don't see many of them very often.


Where am I going with this?


So, I'm usually just fine with this state of affairs. I much prefer real life, and let that infuse the art. I don't need to live in the art. Not at almost 40, anyway. That can be exhausting. I did enough of that in my 20s...barely survived. Besides, of the arts, writing is fairly solitary...both literally and spiritually. There are people I know fairly well who have no or only passing knowledge of my life as a novelist. (Funny story from back when I was doing commentaries for All Things Considered on NPR: the day after one of my pieces ran, I was dropping off Fiona at school and another dad said to me, "There was a guy on the radio last night with your name." Wow, says I, preparing to humbly but quite happily explain, when he continues, "For a second thought it might be you. But how could it be you? That's stupid. Besides didn't sound anything like you." These are the Buddha moments to which we aspire.)


There are other times, though...


When I was more songwriter than any other kind of writer, I was surrounded by it. Lived it, breathed, ate it. It was who I hung out with, and all we talked about. It got annoying, sometimes. But when you were stuck, when you couldn't find your way through it, when the answer was teasing but staying in the shadows out of reach...well, there was someone there to talk it through, someone who understood, someone who got it. You know?


I like being solitary in my writer's life now, but there are times, every now and then, when I really wish for someone whose brain works the way mine does, who understands my circuitry. There is always someone there on the end of a phone line or email if I want. But the days of having Nick there with a cup of coffee on a Tuesday morning at the Bridge Cafe in Frenchtown are sorely missed.


When my daughter Kristina was a wee lass, her best friend's Dad was a writer. Not just a writer, a fairly remarkable, talented novelist. Mark McGarrity was his name. And because I was living through art in the army and then the guitar circuit at the time (that was a joke, see above), I never met him. By day, Mark was a reporter for the Star-Ledger. By night, he was Bartholomew Gill. Both Mark and Bartholomew died in a very tragic accident in 2002, right around the time I was beginning to simultaneously lose it and come back to Earth.


I wish I'd known him. Krissy tells me his daughter is doing well. They're still in touch.


Anyway. My final toast this weekend, when it comes, will go to Mark, and his daughter. And if you find yourself hankering for a good Irish mystery, you could do worse than Bartholomew Gill.
Posted by christianbauman at 2:28 PM