a concert, and childhood friends 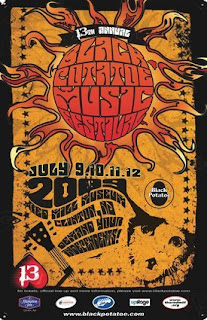 I joined Cags onstage last weekend at BPF for a little "Lost in Durango"...first time singing onstage since In Hoboken release last year, I think. Big fun. Was a gorgeous day on the heels of a stormy night; crystal clear skies, and a good crowd. Mr. Gg killed, as he does. He's got a drummer now, and why not. I missed the later-in-the-day sets from Ellis Paul and Willy Porter unfortunately, but what a pleasure to hear Peter Mulvey again. Haven't seen him in many years, and it was nice to both catch up and hear his set. Peter is just stupidly good. I wrote about him in The NY Times a few months ago.

BPF takes place in the town where I went to high school, and I saw a bunch of old friends (hey Nicole and Rick! Matt and Beth! Rob! Kenny! Karl! Chris Ogden Graham Nash!) some of whom I haven't seen since 1988.

One of those names up there wasn't just from high school, but all the way back to grade school. I put some thoughts here not too long ago about my grade school and those of us who went there (actually, I had 2 grade schools, because I moved from Pennsylvania to New Jersey; I'm refering to the second one, Franklin Township, from fourth grade onward). She was from that small tribe of us who passed together through FTS, one of the smallest little schools in the state at the time. Like me, she was a latecomer to the clan (I think I beat her by a year, her family moving in around the corner maybe 5th grade). There were a small handful of us who came in late and didn't do the full cradle-to-high-school journey: me, Nicole, Kathleen, Virginia, Jon B. We were the first small signs of what would be a large boom in the township (and a massive boom in the county), but that wasn't so clear back in 1980. Actually, before us, it wasn't so much a cradle-to-high-school journey but often a cradle-to-grave journey. Hunterdon County (old Hunterdon County, I mean) was a farm community, and if you were born there, you died there, and your children did the same. You can still see old Hunterdon County (and old Franklin Townhsip) but you have to tilt your head and squint and know where to look. (You can start at Ma D's in Frenchtown.)

I say all this to refer back to what I wrote a few months ago about our small circle of kids who went through FTS; forty of us, I think. Having the small group like we did intensifies what is already the case about childhood: childhood is like being in the wilderness, and pushes an intense bond among those who go through it together...like prison, like the army. You grab ahold of each other and survive. You do terrible things to one another, while simultaneously loving and understanding each other better than anyone else in the world. And then, one day...it's over. Just like that. It's over, and you walk away.

Which is why it's so strange when, many years later, you see someone from school...strange enough from high school, even stranger from the purple, mysterious depths of grade school. It's one thing, I guess, to go to a reunion (I haven't gone to one, but I guess) when you know it's coming, and you know there will be time beforehand to get your thoughts and memories straight, and time enough at the event to sit down and talk and laugh (hopefully laugh, right?). My wife went to a reunion and she said it was weird, but it's why she was there, and it was good and fun in the end. Something else entirely to be taken unexpectedly, and here is this person (or people) you went through such an intense period of your life with, and you have all of thirty seconds to say hello, wow, how are the kids?

There are reasons I don't live where I grew up, one of them being the need to put some distance between my childhood and my life (as if they were two seperate things, and I guess they are). And I go through my days assuming I'll never see any of them ever again, and that's okay, because I hold them in my head as memories, I have them up there as I remember them: eleven and twelve years old, summertime fearless, pushing down the old path through the woods by the abandoned train station in Pittstown. It's almost unfair to see someone from the old tribe for only thirty seconds, for a fleeting moment at a concert. Almost better to not see them at all. Because after all that, because after all we went through (and I mean everyone, because we all survived childhood, right?) if you're going to see someone again you want to be able to sit down and say, "Hello, how are you? Did you come out okay on the other side? I'm sorry if I ever did anything to hurt you. I know you feel the same. Anyway, I wish you the best, because I'm one of the people who knows how much you deserve it."
Posted by christianbauman at 9:05 AM