When we did the book release party for "In Hoboken" at Maxwells, my ol' pal Gregg put together a CD of good drinking music to be played before the live music started in the back room. Clever guy that he is, it was all songs that are in one way or another mentioned in the novel. Either actually quoted from, or refered to, or hinted at in passing, or...you get the idea.

So here it is...the official "In Hoboken" soundtrack singles (presented in no particular order).

It's not every day you get Blue Oyster Cult and Stephen Foster on the same playlist. We do what we do.

And Gregg clearly had time on his hands that week, because he even made up some nifty album art for your iTunes playlist. 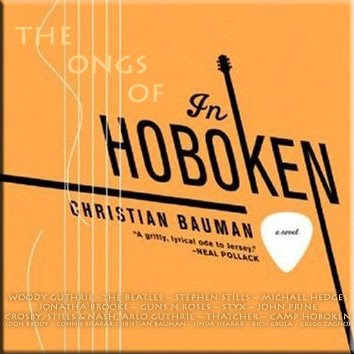 With apologies to Melville House. At the very least.

Posted by christianbauman at 12:11 PM