stop dragging my heart around

Hands down, the most fun I had in high school was being the drummer in a garage band. In a high school career that was mostly miserable with a few bright spots, this was the absolute brightest. It's a no-brainer, really. Is it possible to have more fun than playing in a rock band, at any age? I don't think so. We were called Hypothermia, because we practiced in the unheated loft of my barn. That's how I got the gig, actually. I wasn't a very good drummer. But I had a drum set and a place where the band could practice. That's really half the battle. Matt Williams (who played bass and owned all the equipment) and I say now we were the most dysfunctional rhythm section in rock history. And that's saying something.

This pic below was shot moments after our first gig (a 60s-theme dance in the old Girls' Gym at the high school). I'm quite sure I will be hunted down and hurt for posting this picture on the internet. 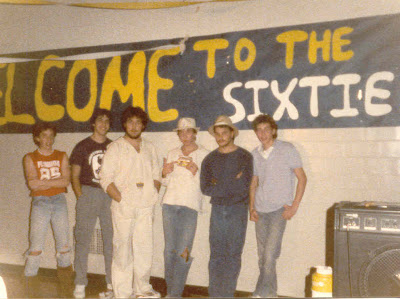 Check out the suede-fringed boots and coral necklace. Yeah, baby. I really made some stunning fashion decisions at the age of 15.

Say what you will, though. We had a great time. And I don't know too many high school bands with the balls to attempt "Scenes From An Italian Restauant." A few of these guys are still out there playing (Matt, Gregg, Karl).

Matt got married this summer, to another old friend of ours, Beth. We posed for the occasion in the pic below...not a pair of parachute pants to be found... 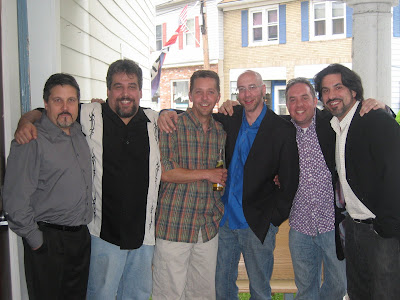 The great news is that Beth and Matt are now proud parents of baby Maeve. Congratulations guys.
Posted by christianbauman at 9:15 AM