with Vin Scelsa on Idiot's Delight 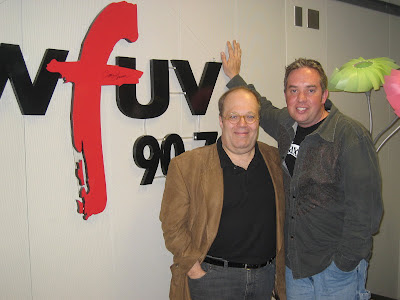 Had a fabulous time with Vin Scelsa on Saturday. And got to check another box on my Legends of Radio fantasy list. In usual Vin fashion, the conversation was freeflowing and all over the map...we both read from all three of my novels, played some good music, pontificated on matters profound, and Vin tried to pry out of me the real identity of every character I've ever written.
The broadcast is available streaming here at the WFUV site, although only for two weeks or so because they don't permanently archive. But if you've got a speedy connection and/or some time to download, you can pull the entire broadcast as an mp3 (wrapped in a zip file) from the Idiot's Delight fan site. The whole show is 4 hours long...my segment is first in the broadcast, and lasts 2 hours.
***
Here is how WFUV introduced the show:
Christian Bauman, writer and public radio commentator ("All Things Considered"), will talk with Vin about his latest novel, "In Hoboken", which chronicles the acoustic folk scene in that unique city across the Hudson River during the mid-90s. Bauman, whose experience as a soldier in Somalia and Haiti earlier in that decade informed his novels "The Ice Beneath You" and "Voodoo Lounge," is not only a novelust but a songwriter and guitarist who was part of the "Camp Hoboken" collective of musicians and artists that thrived at Maxwell's and other clubs in NJ and NYC in the mid-to-late 90s. His new novel throbs with a hands-on accurate portrait of the city and its inhabitants, a city going through enormous changes and a group of people trying hard to cling to a musical chain that links back to Woody Guthrie. Readers and listeners will recognize very real people in Christian Bauman's fictional characters, notably the late Don Brody of The Marys, and even a radio station called WFUV that figures occasionally in the tale.
***
Inbetween all of our jawing we spun discs. Here's the playlist, scattered around the 2-hour conversation:
1. "The Past Didn't Go Anywhere" / Utah Phillips & Ani DiFranco
2. "God Damn Everything But the Circus" / The Story
3. "The Day Roy Orbison Died" / The Marys
4. "The Grind" / Gregg Cagno
5. "The Places You Will Go" / Christian Bauman
6. "Give Me Some Truth" / John Lennon
7. "The Queen of Ohio" / Christian Bauman
8. "Gone" / Big Happy Crowd
Posted by christianbauman at 4:43 PM