Okay, one more, and then that is it, I swear, for the month, if not the year.

Not to be outdone by Grula, Gregg sent this one below in the middle of the night. Pic from a long-forgotten newspaper feature, that's Carol Sharar with the violin, Gregg and me, a few minutes before we walked onstage for my set and to sing one with Pete Seeger at an outdoor benefit concert circa 1996 (Pete joined us for Woody's Do Re Mi; thanks Pete). 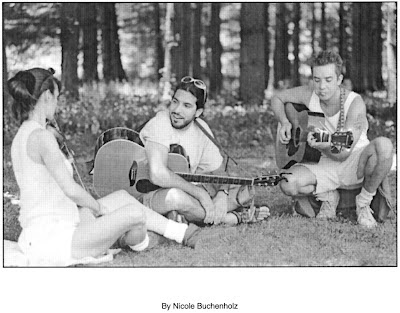 It was that same summer that I was working on a short story called "Two Soldiers" that, a few years later, became the basis of The Ice Beneath You.

Posted by christianbauman at 8:25 AM