Oh, the horror. Oh, the humanity. Cats and dogs, living together. Cowbells will be rung.

You know...I think Hypothermia must have been a much more influential band than we realized back in 1986. An article in this week's New Yorker says that Occupy Wall Street might fail due to "the pressure of hypothermia." Damn.
See you on Black Friday. More info here.
In other news, speaking of Occupy Wall Street, my friend Chris Hedges has been up to some mischief.
And in other other news, five years after having it painted, we finally got the sign up yesterday. It's got nothing to do with education. It's Gaelic, for "The Dog House." 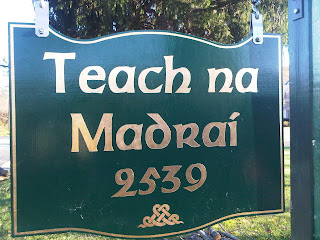 Posted by christianbauman at 11:16 AM 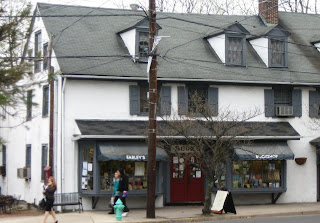 I stopped in at Farleys Bookshop the other night for a wine & cheese & cigar memorial for owner Jim Farley, who passed away last week. I didn't really know Jim, but boy do I know his shop and some of the people he's cultivated. Farleys Bookshop -- half a block in from the Delaware River in New Hope -- is almost a piece of fiction itself, or, rather, from a piece of fiction. It is so good, so perfect, that it doesn't seem possible that it exists in the modern world. It calls to mind a little bit of Penelope Fitzgerald's The Bookshop, but, more, something out of Dickens. Or a shop found deep inside Diagon Alley. That Farleys is the best book store in the greater Philadelphia area is without question; to me, it is the best book store in the country. It is wood and plaster and towering, teetering stacks and aisles too narrow for those widely hipped. If you get invited upstairs for some reason the stacks become mountains; these are decades worth of galleys and advance reader copies, which any bookstore gets ten of a day. Any normal merchant would throw most of these out. But not at Farleys. Because who can throw out a book? Indeed. You may read inside of Farleys, for as long as you need to, without fear of raised eyebrows or grublmed admonition.
When I was a boy growing up in Hunterdon County, across the river, a winter day in Farleys was to slip the bounds of reality into a transcendent universe ruled by the greater magisterium of literature and language. When my first novel was published and The New York Times photographer came to snap the requisite so-serious-young-author photo, it was in front of a leaning Farleys stack that I posed. The happiest book release party I ever had (In Hoboken) was in the back room there. And still, when I need to disappear for while, it is on my top five list of locations from which to vanish. In a town with an abnormally large population of writers -- living and ghosts -- Farleys is the nexus around which we all orbit.
Not just real estate, though. People...Rebekah Farley...Julian...they seem to know where everything is. Books and otherwise. I'm prejudiced, of course. One of my daughters works there. But still. In what sounds like an overall interesting life (he went to seminary with Mr. Rogers...he lived in Paris), building Farleys was an achievement for which we could never thank Jim Farley enough.
In other news, last weekend I took the picture below. That's Fiona, just below the top lip of Trail 41 (a blue) on the new mountain at Stoneham, in Quebec. It was the height of perfect autumn in Quebec last weekend, 70 degrees with no humidity and clear blue skies (for the most part). So strange and funny to see this place that I have only ever seen under four feet of snow, sans snow. 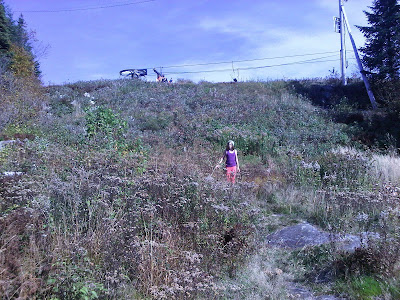 From the wildflowers of Quebec, I arrived back home in New Hope on Monday to garden flowers in a vase, picked by Kristina while I was gone. Not impressed by the flowers is Ms. Thing, who is generally not impressed by much. 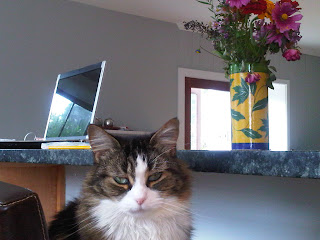 Posted by christianbauman at 6:01 PM