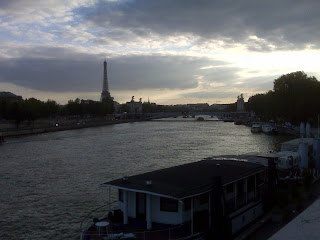 Right up the Champs Elysees, pal.

For the flight home, and then the flight out to the Left Coast -- where I am this week -- reading material was Neil Gaiman's Fragile Things. He's the bomb, plain and simple.
Posted by christianbauman at 4:16 PM

could it be, options are few?

In the Times today, someone named Robert Frank -- an economist affiliated with both Cornell and NYU -- has written a review of two new books about Wal-Mart. Let me start by saying I'm not a huge Wal-Mart fan. I'm not an enemy, just not a huge fan. The big box, the killed downtowns, etc etc. It wrinkles my nose, although not much more than that: distasteful, but also, imho, inevitable. Sad, but inevitable. On a personal note, I'm just more of a Target guy. If need for the big box arises, I go to the red one, not the blue one. Let me also say I AM a big fan of Barbara Ehrenreich and her Nickel and Dimed from a few years back.

Okay, great. Having said all that, can I say, Mr. Frank's review/article in today's Times is one of the most ridiculous things I've read in a while. Two quotes:

"It is no mystery that consumers show up in record numbers when a retailer offers significantly lower prices. More puzzling, however, is how the notoriously stingy Wal-Mart has managed to attract so many dedicated workers. Anyone who has read Barbara Ehrenreich’s description of her experiences as a Wal-Mart clerk in “Nickel and Dimed” or Steven Greenhouse’s chronicle of Wal-Mart’s widespread flouting of safety and hours regulations in “The Big Squeeze” might well wonder why anyone would even consider a job with the company. "

"While Moreton’s book answers important questions about why workers have been willing to accept Wal-Mart’s austere compensation package, Lichtenstein’s sheds valuable light on the technological reasons for the company’s success. "

It's people like Mr. Frank who read Ehrenreich and annotate her and chat about her in chatty circles and write smart article in the Times...but somehow manage to avoid actually understanding or internalizing anything that Ms. Eherenreich has actually written. A completele and maddening lack of understanding.

Take that first quote. Basically, he's saying that since Nickel and Dimed was published, you "might well wonder why anyone would even consider a job with the company." And that second quote: "why workers have been willing to accept Wal-Mart's austere compensation package."

Can I just say: what an ass.

I can picture it now, the internal conversation of a 40-year-old mother of three in Flemington, NJ or Falmouth, MA or Sacramento, CA: "Well, Billy's raise this year took him from $50,000 a year up to $52,000 a year. That's a little help, but boy we're still strapped. I guess I'll have to pick something up in the evenings when he comes home from the plant. Oh, but wait, I was just reading Nickel and Dimed, and it reported dirty pool down at the Wal-Mart. Never mind, we'll just get by I guess."

It's really that second quote of his that gets me, though...both the point of it and the language he uses: "why workers have been willing to accept Wal-Mart's austere compensation package." I get angirer every time I read that line. Really, Mr. Frank? You think that's how it goes down at the HR desk at Wal-Mart? Here comes Steve, who's sweating his ass off all day in an auto-body shop but still can't provide for his family, so he goes down to Wal-Mart for weekend hours. He has an enlightened conversation with the HR person, then sits back, shakes his head, and says: "You know, I'm afraid I just can't accept this austere compensation package. Verily, I say to thee, the grim coin you offer is unreasonable. Instead, I shall to Cornell go, and inquire there as to a more favorable package, as I'm sure my credentials will astonish them."

It's someone like Mr. Frank who might well wonder why I joined the army in 1991, with a war under way. Why would some do that, what with the Army's austere compensation package and -- you know -- chance of death and dismemberment?

Because there were no other choices. Because people don't have options.

Is his article wrong? No. Do the books he's reviewing get it wrong? No.
It's that tone.

It's that same tone everyone academic seemed to have when Nickel and Dimed came out: "What?!?! What a shock!"

The same tone when Chris Hedges released American Fascists (not Chris himself, mind you, anymore than Ehrenreich herself)...I remember the room the night of the book release party at Gerald Stern's house: Chris read from the book to a general reaction of: "What?!??! Shocking!"

And I just wanted to stand up and say to those gathered: Really? Really...are you kidding me? If you're shocked, then you're an ass. (I hate to use a cliche phrase, but the bumpersticker "You're not paying attention" fits well here.)

Just like everyone "discovering" soldiers post-2001. Really? Same guys, been doing the same thing, for you, for 100 years+ now. Nice of you to notice, now that you're scared.

Professor Frank's surprised deconstruction of Christian fundamentals and traditional male/females roles in management at Wal-Mart isn't wrong, or off. It's dead on. But that tone: "Gee whiz, don't they see? Why would anyone settle for this austere compensation package?"